(P.A.S.S) Paranormal And Spirit Seekers. We are a Wiltshire based paranormal team. 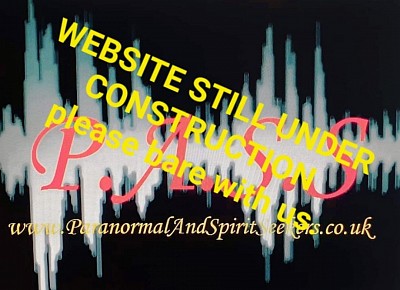 Who are Paranormal And Spirit Seekers?

We are Paranormal And Spirit Seekers a Wiltshire based paranormal investigation team made up of three friends who meet whilst all being apart of an old paranormal events team, after much consideration and realisation that running events wasn't what we wanted to do we decided to part ways and formed our own team.

here the team at P.A.S.S investigate the field of paranormal in search for as much evidence as possible that we can find to enable us to share with the world, for us the paranormal investigating is about finding evidence and when we do we always explore every possibility we can to make sure anything is debunked before assuming its paranormal, all the photos and videos we post on our website has been thoroughly reviewed multiple times and all captions/descriptions attached are based on our opinions as a team

As a team we all agreed we would not disclose the locations of our investigations unless we have full consent from the property owners or the location is well known already, some may ask why and its simple really we don't share the details of our locations out of respect for the property owners and because it reduces the chances of locations being over investigated or high jacked by events companies looking to use the location for profitable gain and entertainment purposes(in our opinions that is all these event companies are looking for is the scare factor and profit which is why you find attending such events they are always booked to host the maximum number the venues allow).

Are we looking/do we accept new members to the team?

As a team we are always looking for new members to join us and happy to accept new members into our team however we do have our own expectations of the people we are willing to allow to become a member of P.A.S.S. we are happy for other people to come along with us on investigations as long as they are willing to listen to our guidance and happy to make their own travel arrangements and help pay towards the cost of venue hire. 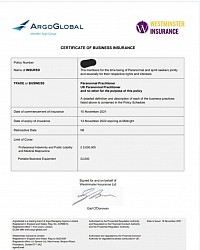 Our certificate of proof for public liability insurance covering us as a team policy number is hidden but copy of the certificate is always provided on request for any location we investigate.

I had my first Paranormal experience when I was 5 years old and from then it became a regular encounter for me. As I grew up the more I was able to channel my abilities ,I can sense the presence of the Paranormal and use many different methods to communicate with the spirit realm.

Why do I investigate the paranormal?

Ever since I was 5 years old when I had my first experience of the paranormal ( seeing and having conversations my nan who passed away before i was born sat on the end of my bed) it has been an interest of mine to find answers although the term Paranormal is just a "Umbrella" for all things unexplainable for me my focus of the paranormal is the spiritual and "ghost" side of things, searching for signs of the afterlife and evidence of spiritual existence.

Some of my experiences have been small from seeing spirit figures in the shadows and some have been more advanced,

As a team our last investigation took use to an ancient hill fort the start of the night was quite and disturbed by the neighbouring military flying. As the night got darker and colder the atmosphere shifted and i felt a strong connection with a little girl whilst we was investigating the remains of a round house within the inner keep of the site we moved to another location within the keep an area we assume would have housed the church whilst at this spot the connection with the little girl suddenly changed to that of what i can only assume was her father and the connection was so strong that my entire persona changed almost like my spirit had entered limbo and the male spirit had occupied its place on a tempory basis (colleges dan and kym can tell you more from their point of view) at one point dan went for a walk around the site alone and thought he was having a conversation with me however i was not there, this is lead me to believe that he was seeing my spirit whilst it was in limbo, later whilst he was away walking further around the site i asked kym to contact him via the radio to check on him as i had a strange feeling that there was something/someone following him, his response was that he was ok but felt like something was following him but kym didnt sense any of this at the time which is unusual as myself and kym tend to pick up on things in different ways either at the same time or close to when one or the other has sensed something.

Click to read more ...
Made with SimDif
Paranormal and spirit seekers